The Best Leh-Ladakh Itinerary for 10 days

Ladakh is a fascinating place. Anyone who has once visited Ladakh can never forget its landscape, its people and the eternal beauty it hides between those colourful layers of mountains. Planning a trip to Leh has never been an easy task. With help from various sites, we were all set for the trip that we were waiting for so long! Here is a detailed report on our travel to Ladakh

We completed our Amarnath Yatra successfully before we ventured for the anticipated trip to Leh. From Baltal, we hired a car to Kargil. We left the greenery of Baltal and entered the barren dusty mountain roads. The Zozila Pass said to be one of the most treacherous passes of India was just a glimpse of how the trans-Himalayan passes would be.We reached Kargil at the evening and rested for the night. Ride through the Zoji La

The next morning we started for Leh. The journey to Leh was equally exciting. We got the first taste of the magnificent monasteries of Ladakh at Mulbek where the gigantic Maitreya Buddha stood towering over us. 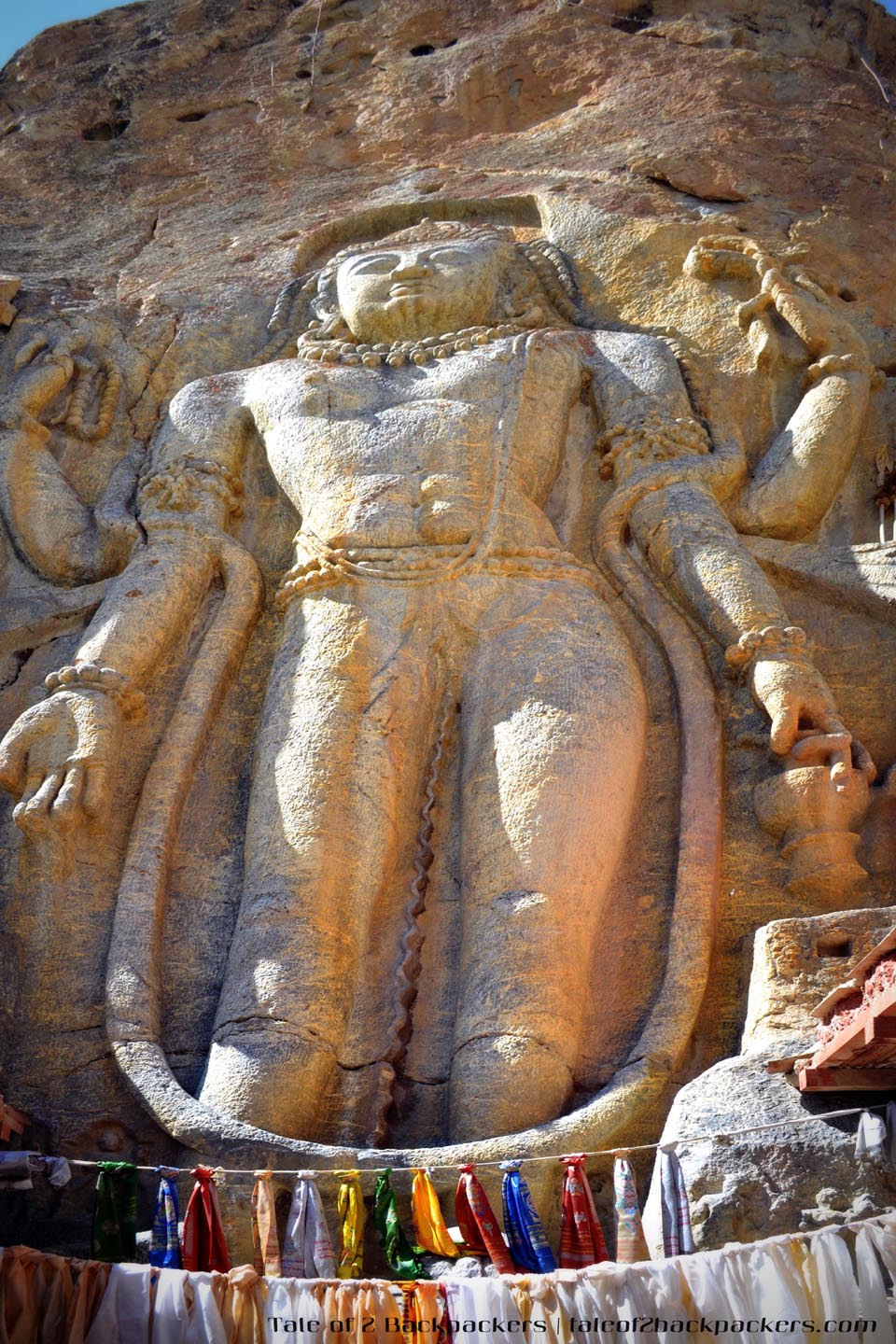 The Maitreya Buddha at Mulbek monastery

We travelled and crossed the Fotu La and the Namik La passes. Just as we crossed the Namik La, we saw something that looked straight out of a Hollywood movie. The breathtaking Lamayuru Monastery stood there with all its glory. With meandering roads leading to the monastery, it was the ethereal beauty of the place that stood out. We were not able to stay the night at Lamayuru, but I can well imagine how enchanting the place would look at a full moon night! 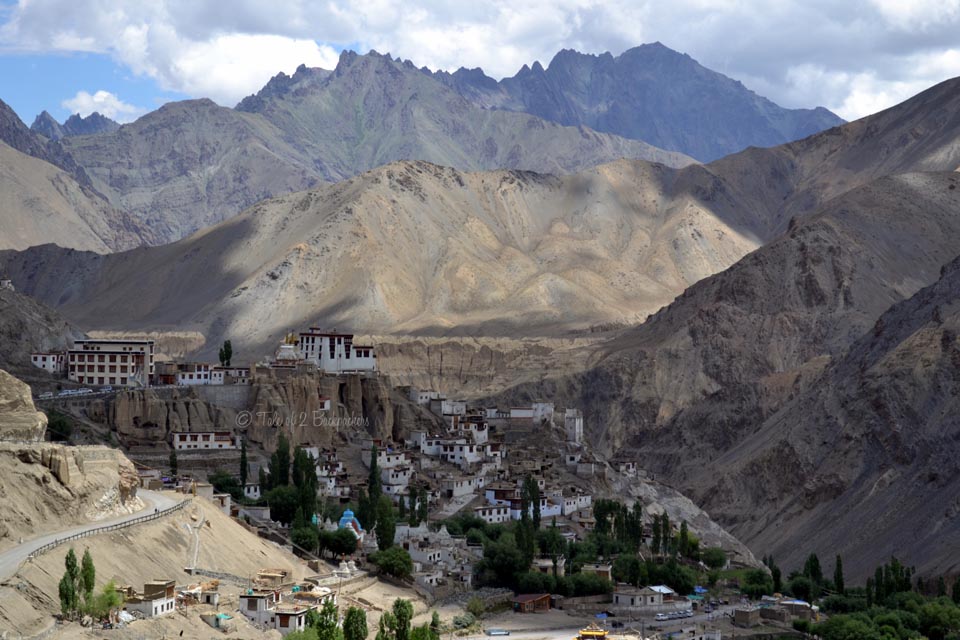 After our visit to the Lamayuru, we headed towards Leh town. Leh in itself is a small and colourful town. The markets are bustling with activities during the day. There are numerous shops that sell Buddhist artifacts, statues of Buddha and other goodies. The Tibetan markets are also there selling garments, shoes, bags and any adventure gear you can think of. Well, many are branded, but I cannot assure you about the authenticity of the brands! And finally, there are shops selling junk dresses (Yes I call those funky, colourful dresses as them junk dresses) and pieces of jewellery as well as pashminas. Leh with all its colours and flavours is a town full of life. With people from various countries (Yes, we see more of foreign tourists and travellers here) the place is buzzing with activity. 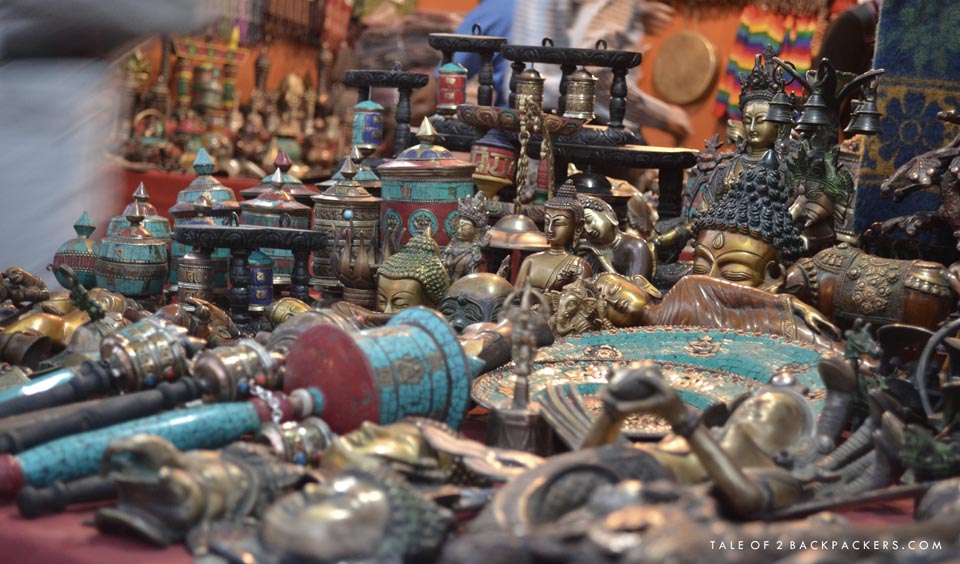 Beautiful artefacts – care to buy some?

After a well-deserved rest, the next day we started for Pangong Lake. We had planned to stay the night near the Lake so that we can experience a night beside the lake. The road to the Pangong goes through the Changla Pass, another high trans-Himalayan pass. I was really excited to see the cute marmots on the way. These animals seemed so friendly! As I was looking for more marmots, we saw a glimpse of blue. Yes, that was the Pangong Lake, the huge lake which has only 40% of it in India. The Pangong Lake played hide and seek with us for some time before it revealed us to us in full glory. I had never seen such a shade of clear blue before! The azure lake and the golden mountain ranges at its back looked like a perfect picture postcard. I think the whole of this region is like a postcard at which you can stare for hours and marvel. We camped near the lake, enjoyed the changing colours of the lake at different times of the day and also had a campfire near the lake.  My nomadic heart truly was for a treat that day. 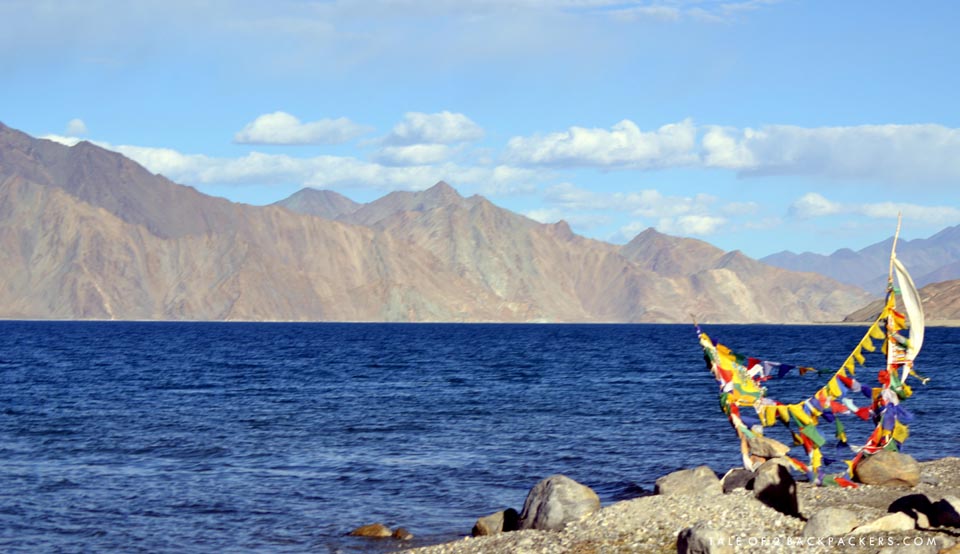 We were back from Pangong and while returning we visited the Hemis Monastery, Thicksey Monastery, Shey Palace and the Leh Palace along with the Sindhu Ghat. There are no words to describe the grandeur of the monasteries of the Leh. But what surprised me was the serenity of the Sindhu Ghat. A peaceful place where you can just sit with your legs in the waters of Sindhu and contemplate on the journeys you have taken, the sights you have seen. 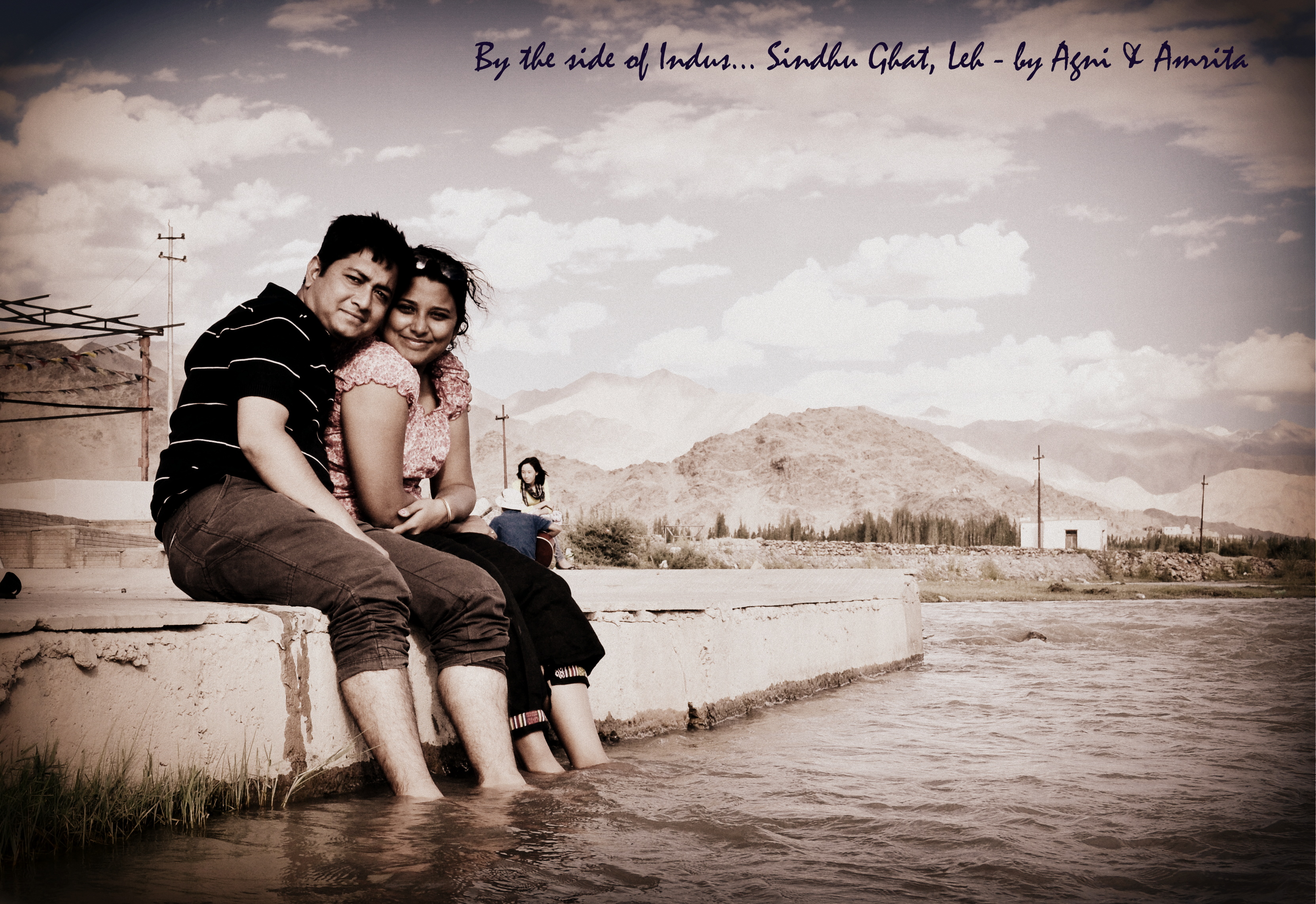 This day was reserved for Nubra Valley. To reach Nubra, we had to cross the world’s highest motorable pass the Khardung la. Not only the roads, but the weather also become treacherous at Khardung La. The sunny weather of Leh became gloomy once we were near the pass and suddenly snowflakes were all over me. It was snowing at Khardung La. Just imagine the feeling of standing at a height of about 18000 ft and experiencing snowfall! It is simply amazing. 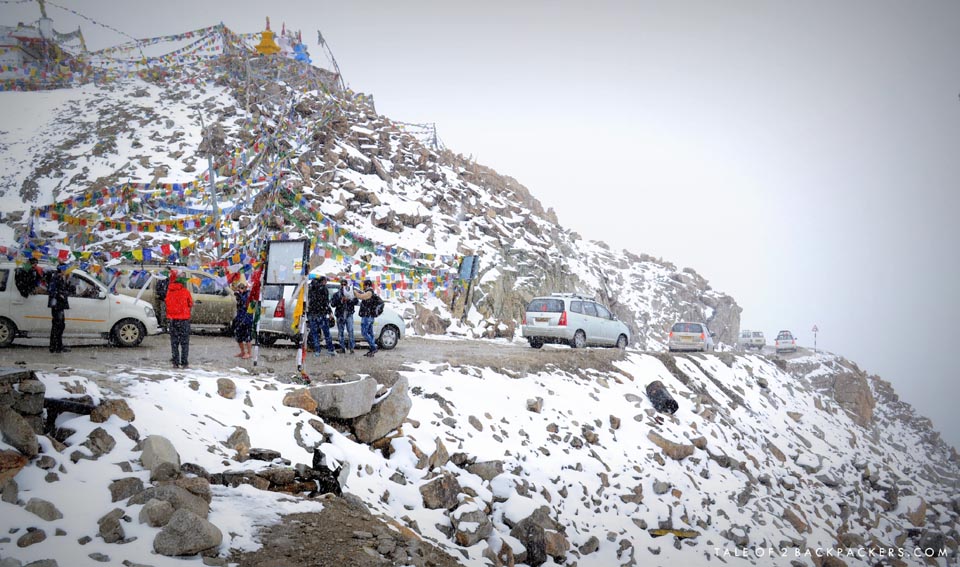 We were in the midst of mountains and rugged terrains so long, but this day we saw stretches of sands and a black road among those sandy stretches. Nubra is one of the coldest deserts of the world and double-humped Bactrian camels are found only here apart from the Gobi desert. And then the colossal statue of Maitreya Buddha came to our sight. That was the Diskit Monastery- a place where the ancient and the modern stands to look at each other. At the mountain over the Shyok river stands the oldest monastery of Ladakh region, the Diskit Monastery and exactly in front of it, stands the 32 m Maitreya or the future Buddha, looking down at the Shyok river. 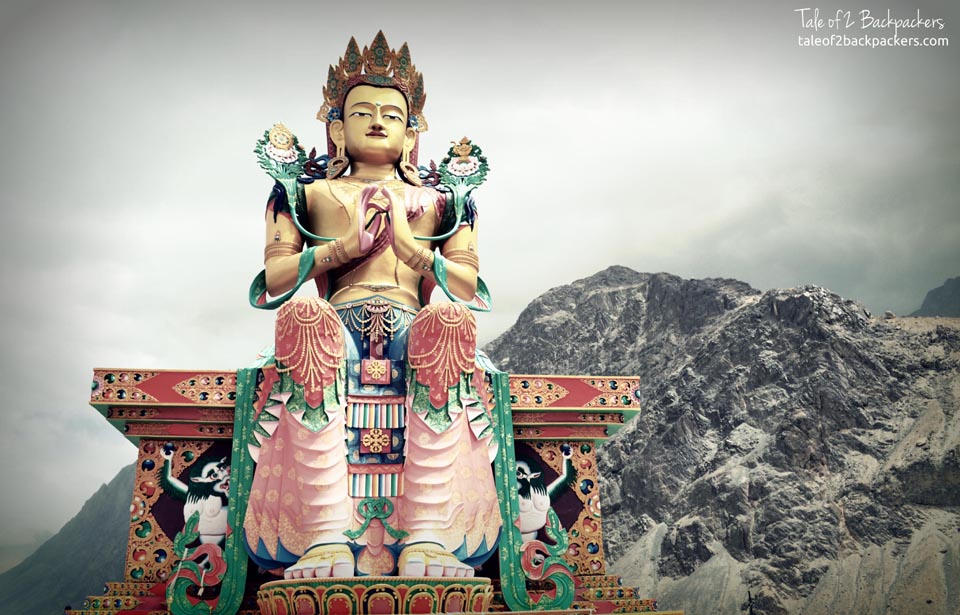 A ride on the camels simply completed our day. We stayed at Hunder for the night at a homestay. We were simply bowled over by the hospitality of the people there. The next morning we were all set to be back at Leh.

The return from Nubra to Leh was equally long and arduous. After returning from Nubra Valley , it ews only roaming aroundthe streets of Leh for us. 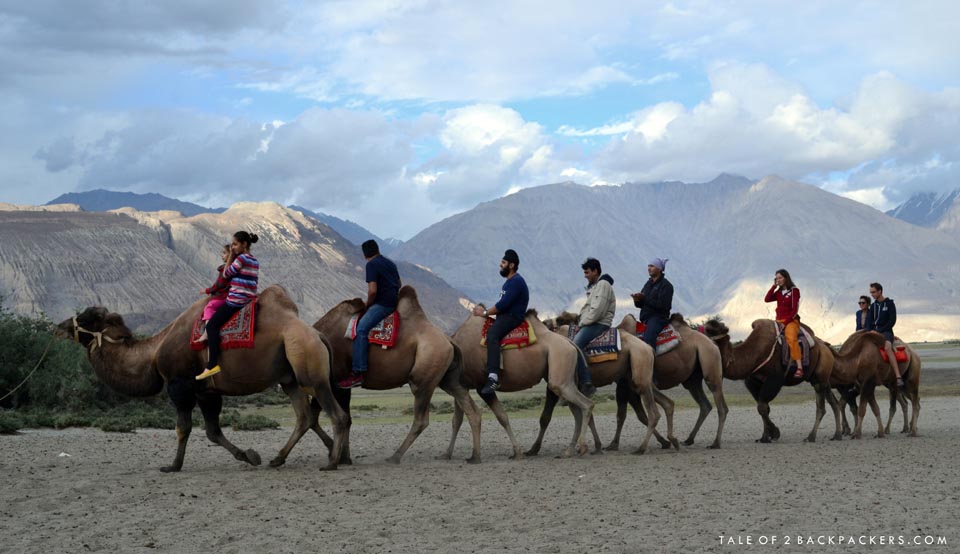 A day of relatively lesser travel when we visited the monasteries near Leh – the Alchi, Likir, Spituk monastery. Each monastery had their own distinct charm and visiting them increased our thirst for knowing about them more. We travelled past the Magnetic Hill this day. and all that we heard about the Magnetic Hill was true! The car really moves ahead even though it is not being driven. The evening was spent viewing the sunset from Shanti Stupa and roaming around Leh markets. 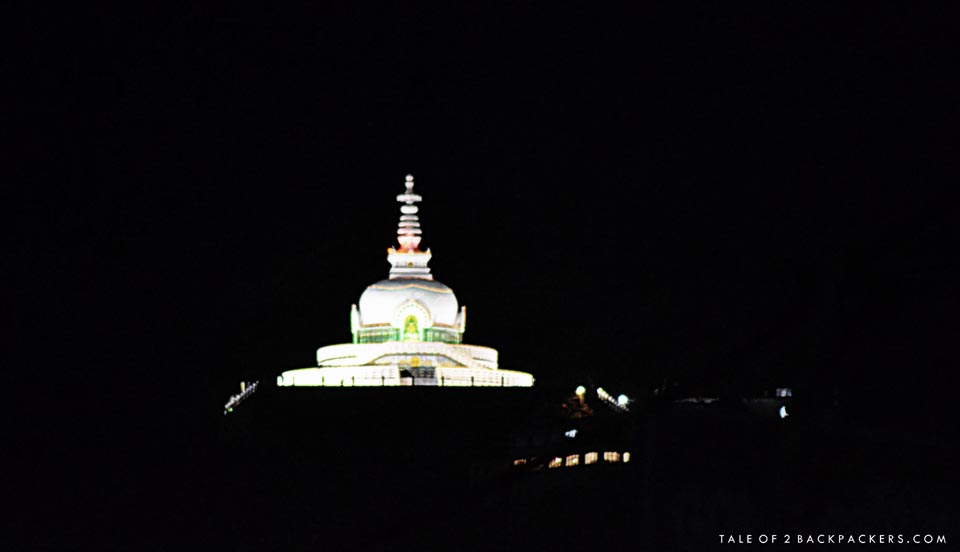 The day to leave Leh had come. But we decided not to let the spirit of adventure die. We were all ready to set on the journey through the Leh- Manali Highway – the route which is there in every wayfarers’ bucket list. And truly so, the Leh- Manali route is simply grand and a saga. The scenery, mountains, terrains everything about this road is epic. We had a stopover at Keylong and reached Manali the next day.

The Leh – Manali Highway – the grand ending to an epic adventure

The remarkable tour has a perfect ending, it was no less than a blockbuster. Due to time restraint, we did not visit the Tso Moriri and HanuDha. We plan to do that soon. It is so very true that Leh is like a mecca to all Indian travellers. The place has all the thrills and excitement. Once you visit Ladakh, you simply cannot stop raving about it.  The same is with us.

The best way to visit Leh by road is to enter by the Srinagar-Leh highway and return by the Leh – Manali highway. This also helps in proper acclimatization.

ATMs: ATMs are found in Leh city. But carry cash when you are travelling to Pangong, Nubra or Tso Moriri. 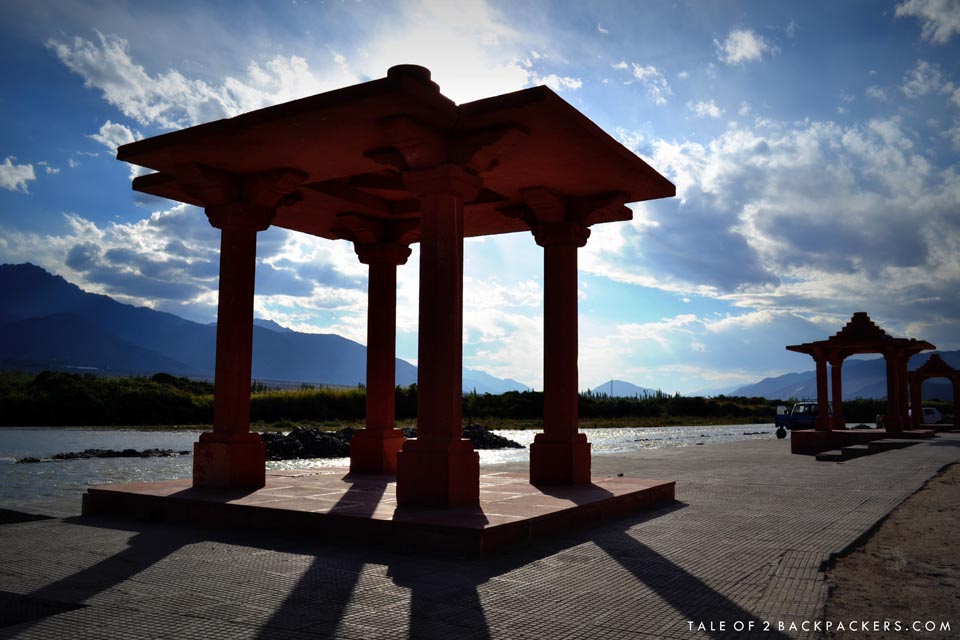 At the Sindhu Ghat 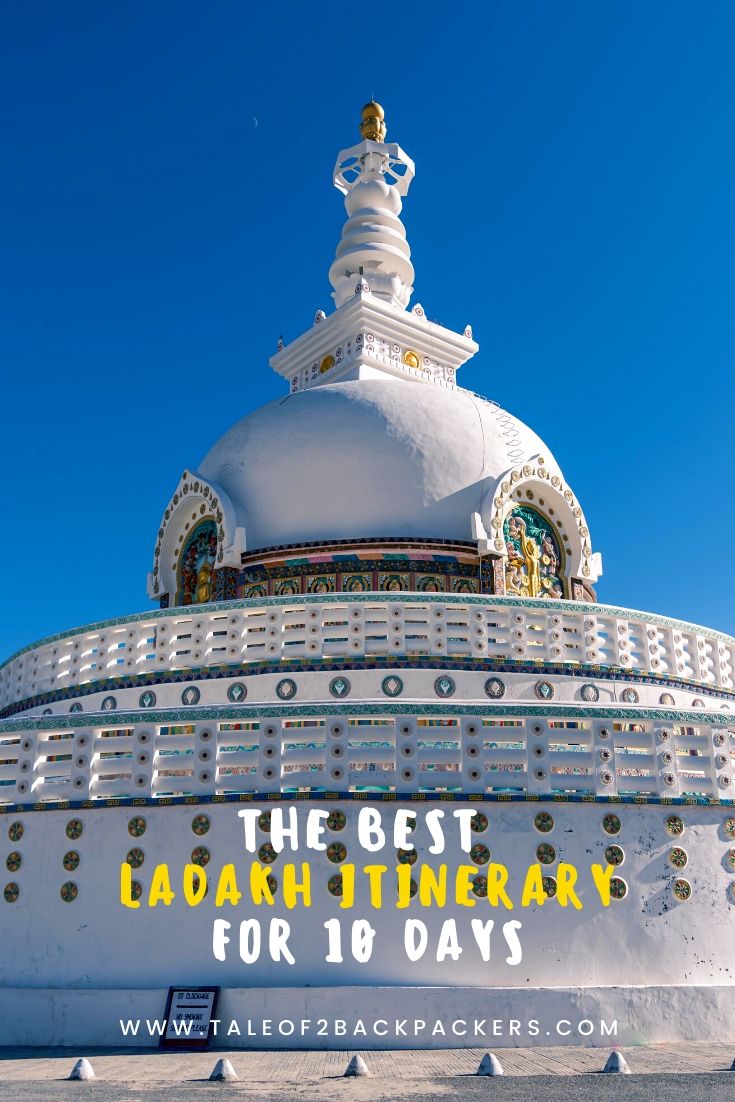 Ladakh is no doubt a fascinating place. Anyone who has once visited Ladakh can never forget its landscape, its people and the eternal beauty hidden between those colourful layers of mountains. Of late, Ladakh has been hit by overtourism and it has definitely taken a...

The Chadar Trek is undoubtedly one of our favourite Himalayan treks. The first time we heard about Chadar Frozen River Trek in Ladakh, we were intrigued. When I came to know about the conditions in which we have to trek, I was a bit sceptical. Just imagine walking on...

Kolkata to Ladakh Bike Trip – All that you need to know

Ladakh is known as the place for the ultimate adventure. The landscape, the high mountain passes and its rugged and barren beauty make Ladakh a most coveted place for a road trip. And what can be more exciting and thrilling than to go for a Ladakh Bike Trip from...

We are Agni and Amrita, the husband-and-wife storytelling team behind Tale of 2 Backpackers. Find more About Us.