While I was writing this article about Sheherwali cuisine, I was stuck for a long time about how I am going to start the article. Shall my introductory lines be about food or about Murshidabad? Or should it be about Barikothi, the place where we were invited to experience the heritage, history and culture of the place? Finally, I decided to write down about this dilemma itself. So here is our article that speaks about Sheherwali cuisine.

The name Sheherwali had intrigued me. Why Sheherwali? Does that have anything to do with Shehers or cities? To be honest, we had not heard about Sheherwalis before, even though they are an integral part of cultural diversity of West Bengal. We are a bit ashamed about that too. But our recent trip to Murshidabad introduced me to this 300 years old cuisine that is quite unique and interesting. We usually do not give much thought about vegetarian food (We are being brutally honest here! So please do not judge!), but we heard that Sheherwali cuisine is one of the best vegetarian cuisines in the country. So we wanted to taste and definitely know more about it.

Sheherwalis are the opulent Jain families that migrated from the dry and dusty land of Rajasthan to Bengal almost 300 years ago. It is believed that Manikchand, a Jain merchant arrived at Bengal all the way from the deserts of Rajasthan to the fertile lands of Bengal. He became the personal banker of Nawab Murshid Quli Khan.

Thus Maksudabad became Murshidabad, the seat of power of Bengal. Murshid Quli Khan was the first Nawab of Bengal and Manik Chand became the first diwan. He acquired the title of “Jagat Seth” which literally translates to the banker of the world. Gradually, on the invitation of Manik Chand, a number of Jain merchant families migrated to Murshidabad and settled down in the twin towns of Azimganj and Jiaganj. The Dudherias, Singhis, Nowlakhas, Dugars, Kotharis and many other families settled down in Murshidabad region and adopted the ways of Bengal while retaining their own customs and culture. They adopted the local ways of living, food, attires, customs and even language and evolved as a distinct community. And here started the journey of the Sheherwalis.

As traders, they moved from town to town and so came to be known as Sheherwalis (Sheher means city). The Sherewalis were investors and emerged as the wealthiest communities of Bengal. They were not only the bankers of the Nawabs but also used to finance the trading companies from the European countries. They built huge and beautiful mansions for themselves boasting of elegant architecture and design. We had stayed at one such mansion, Barikothi and experienced their hospitality as well as the grandeur of Murshidabad.

The Jain community mingled with the locals and thus evolved a new way of living. The Bengali influence showed in their way of dressing. While the men started wearing dhoti and Bengali-styled kurta, the women started including saris in their wardrobe. But the major influence was seen in the cuisine.  Sheherwali cuisine evolved as the finest example of the confluence of culture. Purely vegetarian, the Sheherwali cuisine has the best of east and west, having the influence of Rajasthani and Bengali cuisines with a dash of Nawabi influence as well. Some European elements too crept in as the merchants closely worked with the European traders. While it embraced the local ingredients, but strictly retained the essence of Jain cuisine and refrained from using onions, garlic and root vegetables in the food.

The Sheherwalis came from Rajasthan, known for its extreme climate. So their food was usually cooked to last for a longer time. Rajasthani food had liberal use of ghee and milk in them. Fresh vegetables were used in lesser amount in the those dishes. Dal-baati-churma, the ubiquitous Rajasthani dish is infact legendary. I think anyone visiting Rajasthan do not leave the state without having a fare of Dal-baati-churma. I am also guilty of this culinary pleasure when I had visited Pushkar and later Jaipur. Ker Sangri is another dish that I warmed up to.

Well, as you can understand by now, Sheherwali cuisine has all the ingredients of the Rajasthani kitchen with baked bread and a variety of pickles. When the Sheherwalis settled in Bengal, they included vegetables like potol (wax gourd), jackfruit, kanch kola (plantain), bottle gourd, ridge gourd, cucumber etc. and fruits that were found abundantly in Bengal in their diet. They also included the typical Bengal spice paanch phoron (a collection of 5 spices including nigella, cumin, mustard, fennel and fenugreek) in their preparations. Mustard oil which is used in Bengali food was also used liberally in the cuisine.

The Sheherwali cuisine had a Nawabi influence as they used a liberal amount of rose water, kewra water in their preparations especially sweets. Dry fruits, saffron and rose water in their food is also proof that their cooks were fond of the Nawabi cuisine as well.

We had an experience of having the Sheherwali cuisine at Barikothi, a heritage property at Azimganj. The sprawling mansion in front of the Bhagirathi River in itself was an amazing place. The Darbar Hall with its elaborate painted tiles, regal tables and chairs and beautiful lamps were the perfect place to enjoy the Sheherwali dinner. The breakfast was served at an even better place just by the Bhagirathi River (Well, the preference is strictly mine. It was an absolute pleasure to eat seeing the river before me).

Barikothi is the ancestral property of the Dudhoria family. Lipika, our host explained to us the nuances of the Sheherwali cuisine. The Jains usually do not eat anything after sunset and they take the first morsel of food only 48 minutes after the sunrise. So there is usually a large gap between these 2 meals. They usually start their day with a drink called Dhanagra. It is a mix of spices like cardamom, cinnamon, black pepper, bay leaf etc boiled in water and served as the first drink in the morning. Next, we were served a platter of fresh fruits and mirich. Mirich is made of caramelized sugar and black pepper. Dhanagra and mirich is said to give you the required energy for the day and is good for the stomach as well.

The dinner at Barikothi was an elaborate affair where we had a taste of the actual Sheherwali cuisine. Interestingly the food came in different courses. It was a 5-course dinner and each course had different preparations. Each course was served and only after we tasted them, the plates were cleaned and the next course was served. Well, we are usually not used to eating like this and all the Sheherwali cuisine picture that we had seen on the internet were of huge dishes laden with various types of food. So it was quite a different experience for us.

Let’s talk about what we ate at dinner at the royal Darbar Hall!

The first course served us Dal ka paani (lentil soup) and Mathri, which is a deep-fried pancake. Mathri is more like nimki of Bengal. And with mathri was Kutti Mirchi ka achar, a local mild chillie pickle. The Sheherwalis love pickles and I was more than happy about that.

The third one an elaborate one. It came with Missa (gram flour bread), dahi ka barbatti (long beans curry made with curd), Milao ka Sabzi (a curry made with 4 vegetables), Kheera capsicum (cucumber and capsicum vegetable), Aloo chips and Tikra (white bread). Dahi ka Barbatti had a tangy taste because of the curd. The Missa is a bit hard and has to be crumbled and then mixed with any of the curry and eaten.

The fourth course brought in Gatte ka Pulao (gram flour balls in rice), Maria (red gram and rice starch lentil) and Bore ka Akra (roasted gram flour). Gatte ka pulao was spicy and tasted good, though I personally did not like Maria much.

Interestingly, just like the Bengalis, Sheherwali cuisine is incomplete without sweets. They love sweets and serve them with every meal.

I have always believed that vegetarian food is not only about a few preparations of paneer dishes and just a few veg kebabs. Vegetables can be used in the preparations making curries and delectable dishes.

Where can you get Sheherwali Cuisine in Kolkata?

You can get authentic Sheherwali cuisine at Royal Vega by ITC Royal Bengal.

But I would definitely suggest you take a visit to Murshidabad, enjoy the hospitality at Barikothi and taste the 300-year-old Sheherwali cuisine. Just imagine sitting in a royal dining hall and having some of the tastiest vegetarian affairs.

A few more pictures of Barikothi

Did you like the post? Let us know about your thoughts by commenting below. Also, please pin this for a later read.

Disclaimer: We were invited to Barikothi by the Dudhoria family for staying in their heritage property. We thank Darshan and Lipika Dudhoria and all the staffs of Barikothi for their amazing hospitality. A special thanks to Darshan and Lipika for the interesting stories about Barikothi, Sheherwalis and Murshidabad.

How to plan a trip to Gangani (Grand Canyon of Bengal)

About the blog: This blog is about another weekend getaway from Kolkata - Gangani. Also known as the Grand Canyon of Bengal, because of its unique landscape. Located about 130 km from Kolkata near Garhbeta town, Gangani (Gongoni) can be a slightly different place to... 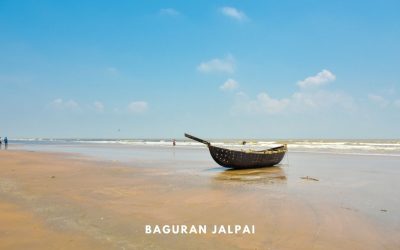 There was only one thing in my mind while looking at the vast expanse of water right in front of me – the sea is relaxing! All those travel quotes about needing “Vitamin Sea” are actually quite true for me at that time. And I enjoyed watching the calm waves lapping...

Buxa Tiger Reserve and Jayanti – A trip to Wilderness in Dooars

Buxa, Jayanti and Lepchakha hold a very special place in our hearts. This trip to Buxa Tiger Reserve and Jayanti was our first trip to Dooars as well as North Bengal. We had visited these places even before we had explored Darjeeling. The Buxa Fort Trek was also our...

India is a country with such a rich and colourful past, with so many secrets and wonders to offer the curious traveller. However, we’re sure you’ll agree, if there is one thing India is renowned for the world over, it’s the cuisine. Some of the world’s best food is...